An Inside Look on Space Jam 2: A New Legacy 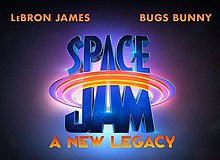 Let’s get ready to rumblllllleeeeee! This summer, Lebron James and the Looney Toons are teaming up in the long awaited Space Jam 2: A New Legacy. The movie as a production has been kept a secret with little of the plot released. For the last few months, NBA fans and movie fans alike have been on the edges of their seats in anticipation.

Compared to the original Space Jam (1996), starring Michael Jordan, James has some pretty big shoes to fill. The release of the original film was felt around the world as a significant moment in pop culture. Jordan was able to perform beautifully and the role added to his awe-inspiring aura as a global icon. It ended up grossing about $230 million at the box office, making it the highest grossing basketball movie of all time.

James, however, may just be the perfect athlete to take on the renewed role in the sequel. Other than the fact that Jordan and James wear the same jersey number (#23) and have been compared as the greatest basketball players of all time, there are other little anecdotes that also make James perfect for the role.

In an interview with Entertainment Weekly, James said that Space Jam “was a big part of his childhood” when living in poverty with his single mother in Akron, Ohio. Lebron added that he wanted to pass on the legacy of the movie to the future generation of kids looking for inspiration right now.

James also plays the role of a father in the movie. James’ son, Dom (played by Cedrick Joe) wants to create games rather than play them. In turn, James’ character has a hard time relating to his son in a meaningful way.

Ryan Coogler, the producer of A New Legacy, said that parents oftentimes push their kids to do certain things when they should be more open minded to their children’s dreams. James, a father of three, is very fitting for the role and hopes to raise awareness to the idea of allowing your kids to be whatever they want to be.

The plot has been covered up quite well over the past few months; however, we have uncovered some fun details about the film (no spoilers). The original Space Jam had the villainous team, the “Monstars,”  but this edition will feature the “Goon Stars” as the villains instead. Many other celebrities will also be featured in the movie. Some of them have been confirmed, including fellow NBA players Damian Lillard, Klay Thompson, Kyrie Irving, and Anthony Davis. Additionally, Michael B. Jordan will also be shown in the film.

The plotline includes James getting sucked into a digital universe in which he must track down the Looney Toons and the exiled Bugs Bunny. The team will also have to defeat the Goon Stars and, as you may have guessed, save basketball (as well as the world).

There is no doubt that the movie has some major hype around it. Come July, Lebron James and Michael Jordan might have an additional component to their GOAT comparison: who is the better actor?