Are the Miami Hurricanes Back? 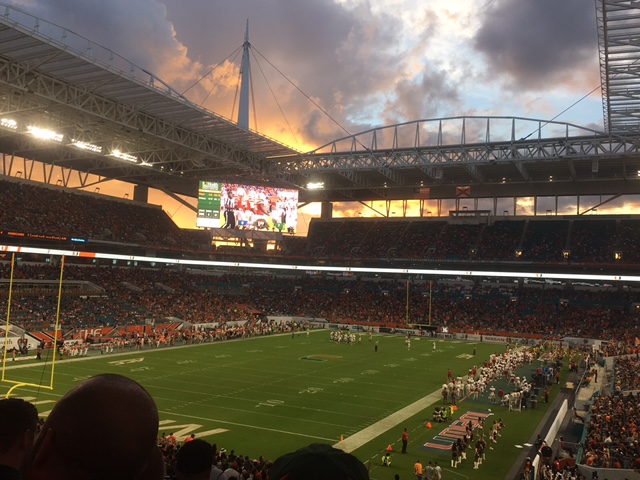 The Miami Hurricanes have started off the season strong, with six wins already under their belt. (via Alvaro Torrejon, Class of 2016)

When the Miami Hurricanes football team defeated the Virginia Tech Hokies on December 7, 2002, they won their 34th consecutive game, one of the longest win streaks in NCAA Division I history. Despite their success, the Ohio State Buckeyes defeated the Hurricanes in the National Championship. Miami won a conference championship in 2003, but ever since joining the ACC in 2004, the Hurricanes haven’t been making a lot of noise in college football; that is, until very recently.

In 2016, Miami hired Mark Richt to be the new head coach of the football team.  That year, Miami won their first bowl game in 10 years. Coming into the 2017 season, fans were very hopeful in thinking that their team could be getting back to its old self.

So far, their wishes have been fulfilled.  Miami has started off this season undefeated at 6-0, led by redshirt junior QB Malik Rosier, sophomore RB Travis Homer, and senior WR Braxton Berrios.  Redshirt junior WR Darrell Langham is also known for his incredible playmaking abilities. In both the Florida State game and the Georgia Tech game this season, Langham had SportsCenter Top 10 quality catches.

Miami’s offense isn’t the only reason their team is doing so well. The Hurricane’s defense has been outstanding this season. They have outscored and opponents 200-112 through 6 games, and have 8 interceptions paired with 3 fumble recoveries. They an average margin of victory of almost 15 points per game, holding opponents to 18.7 points perfect game.

Before the season, Miami was ranked as the 18th best team in the country. After big wins against rival Florida State and Georgia Tech, Miami has found themselves sitting at the number 8 spot.

Pine Crest graduate and University of Miami student Tommy Sullivan gave some on-campus perspective saying, “The atmosphere across campus around the football team is really changing, and as the team continues to build momentum, the fans’ and students’ support is continuing to grow.”

On Saturday, Miami took down Syracuse 27-19, extending their current win streak to 10 games.  Next on their schedule, Miami has to play North Carolina, Virginia Tech, and Notre Dame. Last season, the Hurricanes played those teams in consecutive weeks and lost to all 3 of them. If Miami can manage to win all of these games, especially the Notre Dame rivalry matchup, they will have a legitimate chance of making the College Football Playoffs and pursuing their first National Championship in 16 years.